June is Alzheimer’s & Brain Awareness Month and we encourage you to take the Purple Pledge to support the 47 million people worldwide who are living with Alzheimer’s disease and other dementias.

Dementia is often incorrectly referred to as “senility” or “senile dementia,” which reflects the formerly widespread but incorrect belief that serious mental decline is a normal part of aging. 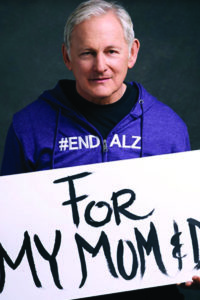 Dementia is not a specific disease. It’s an overall term that describes a group of symptoms associated with a decline in memory or other thinking skills severe enough to reduce a person’s ability to perform everyday activities. Alzheimer’s disease accounts for 60 to 80 percent of cases. Vascular dementia, which occurs after a stroke, is the second most common dementia type. But there are many other conditions that can cause symptoms of dementia, including some that are reversible, such as thyroid problems and vitamin deficiencies.

While symptoms of dementia can vary greatly, at least two of the following core mental functions must be significantly impaired to be considered dementia:

Dementia is caused by damage to brain cells. This damage interferes with the ability of brain cells to communicate with each other. When brain cells cannot communicate normally, thinking, behavior and feelings can be affected. The brain has many distinct regions, each of which is responsible for different functions (for example, memory, judgment and movement). When cells in a particular region are damaged, that region cannot carry out its functions normally.

Based on the Alzheimer’s Association, there is no one test to determine if someone has dementia. Doctors diagnose Alzheimer’s and other types of dementia based on a careful medical history, a physical examination, laboratory tests, and the characteristic changes in thinking, day-to-day function and behavior associated with each type. Doctors can determine that a person has dementia with a high level of certainty. But it’s harder to determine the exact type of dementia because the symptoms and brain changes of different dementias can overlap. In some cases, a doctor may diagnose “dementia” and not specify a type. If this occurs it may be necessary to see a specialist such as a neurologist or gero-psychologist.

Treatment of dementia depends on its cause. In the case of most progressive dementias, including Alzheimer’s disease, there is no cure and no treatment that slows or stops its progression. But there are drug treatments that may temporarily improve symptoms. The same medications used to treat Alzheimer’s are among the drugs sometimes prescribed to help with symptoms of other types of dementias. Non-drug therapies can also alleviate some symptoms of dementia.

Ultimately, the path to effective new treatments for dementia is through increased research funding and increased participation in clinical studies. Right now, volunteers are urgently needed to participate in more than 180+ actively enrolling clinical studies and trials about Alzheimer’s and related dementias.

If you or a loved one is experiencing memory difficulties or other changes in thinking skills, don’t ignore them. See a doctor soon to determine the cause. Professional evaluation may detect a treatable condition.

Follow the Assisting Hands Home Care© Palm Beach’s team for the Walk to End Alzheimer’s and support other local entities to become a big voice of awareness.

How Do You Know If It’s Alzheimer’s Or Just “Old Age”?

What You Should Know About the Finances of Your Senior Parents