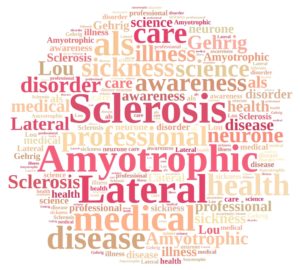 ALS often begins with muscle twitching and weakness in a limb or slurred speech. This article from Mayo Clinic offers an overview of the symptoms, complications and therapies for people suffering from the disease.

ALS is often called Lou Gehrig’s disease, after the baseball player who was diagnosed with it. Doctors usually don’t know why ALS occurs. Some cases are inherited.

ALS often begins with muscle twitching and weakness in a limb, or slurred speech. Eventually, ALS affects control of the muscles needed to move, speak, eat and breathe. There is no cure for this fatal disease.

ALS often starts in the hands, feet or limbs, and then spreads to other parts of your body. As the disease advances and nerve cells are destroyed, your muscles get weaker. This eventually affects chewing, swallowing, speaking and breathing.

There’s generally no pain in the early stages of ALS, and pain is uncommon in the later stages. ALS doesn’t usually affect your bladder control or your senses.

Causes. ALS affects the nerve cells that control voluntary muscle movements such as walking and talking (motor neurons). ALS causes the motor neurons to gradually deteriorate, and then die. Motor neurons extend from the brain to the spinal cord to muscles throughout the body. When motor neurons are damaged, they stop sending messages to the muscles, so the muscles can’t function.

Researchers continue to study possible causes of ALS. Most theories center on a complex interaction between genetic and environmental factors.

Environmental factors, such as the following, might trigger ALS.

Learn more about complications as the disease progresses.

Previous post Home Care and Nutrition Next post Stroke: What is it? Know the Signs. Lower Your Risk.