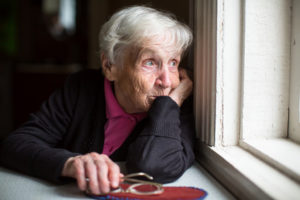 Depression is a serious mental health condition that often goes unrecognized and untreated among seniors. That’s why assessing an older adult’s mental health needs is so important.

We expect our older relatives to slow down as they age, but a significant drop in energy level or a marked change in mood or behavior could signal a more serious matter. Here are some ways to assess your loved one’s mental health needs and seek treatment.

Depression is a serious medical illness that often goes unrecognized and untreated among older adults, according to the National Institute of Mental Health. It’s normal for an older person to feel sad every once in a while or frustrated by health problems or financial concerns. If one of the following symptoms persists and interferes with daily life, however, your loved one could be suffering from depression:

Having a chronic illness or limited ability to function increases a person’s risk of developing depression. If your loved one shows signs of the disease, seek treatment. Left untreated, depression can affect one’s physical health and quality of life. Treatment can include antidepressant medications or talk therapy — or a combination of the two.

Depression sometimes gets misdiagnosed as dementia, a decline in mental ability that can be caused by Alzheimer’s disease, stroke, brain tumor and other illnesses. People with dementia have problems with at least two brain functions, such as memory and language.

It’s also not unusual for a person with dementia to develop depression. Before depression sets in, however, mental decline will have already begun. Other psychological and emotional issues that can arise from dementia include anger, anxiety, loss of inhibitions and paranoia.

For pinpointing the problem, preventing suicide and maintaining mental health, READ ON.