Glaucoma: A Guide For Seniors 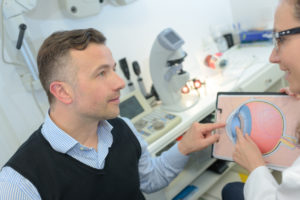 Glaucoma is the cause of about 10% of total blindness in the U.S. and many of the people affected are seniors. It’s important to get ahead of the disease before severe vision loss and blindness occur. This article from the National Council for Aging Care looks at the different types of glaucoma, as well as prevention and treatment.

The American Academy of Family Physicians notes that about 75 percent of those who are legally blind because of glaucoma are seniors. The overall number of Americans who have glaucoma is estimated to be around three million, but as the Glaucoma Research Foundation points out, it’s believed that half of people with glaucoma haven’t been diagnosed yet.

This doesn’t mean that as soon as you are diagnosed with glaucoma, you are definitely going to go blind. There are plenty of treatment options, and it’s important to know exactly what it is you’re dealing with so you can get ahead of the disease before severe vision loss and blindness occur. Let’s take a look at the different types of glaucoma, how they develop, and how you can prevent and treat it best.
What Is Glaucoma?

Glaucoma is the overarching term for a group of conditions that occur when your optic nerve is damaged, which in turn affects the quality of your vision. There is a buildup of pressure inside your eye, and that pressure damages the optic nerve—the main transmitter of information from your eye to your brain. The optic nerve rests at the back of your eyeball.

One of the root causes of glaucoma is optic nerve damage, which is caused by a buildup of pressure in the eye. The increased pressure is caused by fluid that naturally flows through the eye not being able to escape at its previous rate. According to the National Eye Institute, here’s how the optic nerve gets damaged in part to the fluid buildup:

There’s a space toward the front of the eye called the anterior chamber that the fluid flows through. This fluid is used to cleanse other parts of the eye.

The fluid leaves the chamber, passing through a meshy membrane, at the point where the cornea and iris—both toward the front of the eye—meet. Because the fluid is passing through the angle at which they meet, it’s considered “open.”

But there comes a point where the fluid doesn’t flow through the angle at the speed it once did, which causes the buildup of fluid and then pressure in the eye.

Sometimes, there is too much fluid produced by the eye, and it can’t push all of it through the angle. Other times, the angle becomes more blocked over time. In either situation, the buildup of pressure is the result, which causes glaucoma.

For eye diagrams, and to learn more about the symptoms and forms of glaucoma and how it can affect your health, read the entire article.