Hawah Mansray is one of our caregivers. She’s a jewel. While some people may think that taking care of a person who rarely leaves her home would be boring, Hawah makes it both interesting . . . and personal. Listening is a skill we probably all need to improve on. But Hawah seems to understand that listening might be the best thing she can do for her client, Ms. Jean. It was by listening to her, that Hawah understood the importance of a garden to Jean. Working in the garden, making use of the land, watching things grow and enjoying the benefits of the garden – these were all things that her client talked about.

Hawah believed she could bring some of the joy of gardening back to Jean if she could start a garden at her home! After chatting a few times, Hawah knew what vegetables and flowers Jean liked. And even though Hawah had never gardened before, she set out to purchase a few tomato plants – Jean’s favorite – along with some green peppers, sweet peppers, okra and some flowers.

Bringing the plants to Jean brought a sparkle to her eyes. Immediately, Hawah understood that she had guessed correctly. In the beginning, Hawah readied the garden and eventually planted the veggies and flowers. If either of them had a question about the garden, Hawah will do some research on her iPad to get the answers they needed. Each time she works in the garden, which is generally while Jean sleeps, Hawah takes pictures. As she watered the garden and the plants grew, she took more photos. As buds appeared, the anticipation brought smiles to Jean’s face. On some days, Hawah picks a few of the flowers and brings them inside. They bring color, brightness and fragrance to the house for both Jean and Hawah to enjoy.

Together, Hawah and Ms. Jean talk about the growing plants. The garden – its progress and expectations – have become a topic of conversation. As Jean talks to friends and family, she tells everyone about the garden and what they’ve harvested. 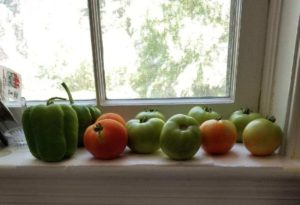 After weeks of watching the plants grow, Jean is now eating fresh, organic tomatoes and green peppers. She enjoys the fresh salads that Hawah fixes with the tomatoes.  And recently Hawah fixed stuffed peppers – which were not only colorful, but delicious. As of this posting, Hawah says they’ve harvested 22 tomatoes and four peppers. Even as she is working the garden this summer, Hawah has started planning for next year! She’s preparing an area near Jean’s window, where she will plant a garden for Jean to look at daily.

According to Hawah, “As a caregiver, I get to know my clients and I learn what they enjoyed when they were younger. Over the years I’ve learned to knit and crochet with clients. I have also read books to my clients. I try to bring back earlier memories in some way.”

Awesome job Hawah. Assisting Hands Home Care is lucky to have you!