Prostate Cancer In Older Men – What Does It Mean? 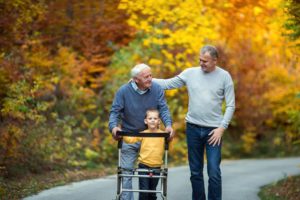 According to ProstateCancer.net, the median age of prostate cancer diagnosis is 66 years old, with the highest proportion of those diagnosed between 65 and 74 years old, followed closely by those between 55 and 64 years old.

How common is prostate cancer in older men?

Only 10% of prostate cancer cases are considered early-onset and occur before the age of 55 years old. The remaining 90% of cases occur in men older than this, and prostate cancer is considered the most common malignancy in the elderly population. It has even been estimated that roughly half of all men between 70 and 80 years old have microscopic evidence of the condition. The number of older men being diagnosed with prostate cancer is rising however, likely due to screening methods like the prostate-specific antigen (PSA) test, and a larger proportion of individuals being screened, as well as an increase in the life expectancy of the general population.

It has been estimated that by 2050, the percentage of individuals older than age 65 will increase four times in comparison to the year 2000. With a greater proportion of older individuals in the world, comes a greater amount of older men who can develop prostate cancer. For this reason, much research is ongoing to determine the best ways to treat men with prostate cancer of varying ages, including the elderly.

What does it mean to get prostate cancer as an older man?

Many factors contribute to an individual’s prostate cancer prognosis including age, clinical stage, grade, comorbidities, PSA level, and response to treatment. Prostate cancer has incredibly high survival rates at the five, ten, and fifteen-year marks, and this is no exception when it comes to men of older age. Survival rates tend to decline very slightly for men roughly 85 and older, but this could also be due to potential life-shortening comorbidities. In fact, young men with aggressive prostate cancer are more likely than their older counterparts to experience prostate-cancer mortality, since many older men may have many other factors that contribute to mortality that come along with the natural aging process.

Prostate-cancer specific mortality is often regarded as being low enough in older men that treatment is typically less aggressive or may not be indicated at all. Aggressive or curative therapy may only be initiated when an individual has an estimated life expectancy of 10 years or more, as most treatment options can carry significant risks or side effects. For this reason, the older the individual, it is possible that they will be less likely to benefit from aggressive therapy. The quality of life impacts of many treatment options may not outweigh the potential gain in life expectancy. An individual who is older and frailer may not even be able to handle treatment and could end up living less time, but with significant quality of life deficits than if they had foregone treatment.

LEARN MORE about the concerns around treatment and what you should look for. https://prostatecancer.net/basics/older-age/