Home Stroke Stroke: What is it? Know the Signs. Lower Your Risk.

Stroke: What is it? Know the Signs. Lower Your Risk. 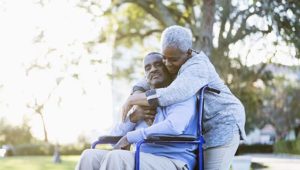 May is National Stroke Awareness Month. It’s important to know the signs of stroke and act quickly if you suspect someone is having one. This article from the National Institute on Aging provides helpful information everyone should know about strokes.

A stroke is serious, just like a heart attack, so it’s important to know the signs of stroke and act quickly if you suspect someone is having one. Stroke is the fourth leading cause of death in the United States, and causes more serious long-term disabilities than any other disease. Older people are at higher risk. You can take steps to lower your chance of having a stroke.

Know the Signs of Stroke. Knowing the symptoms of a stroke and acting quickly could mean the difference between life and disability or death. Call 911 RIGHT AWAY if you see or have any of these symptoms:

Other danger signs that may occur include double vision, drowsiness, and nausea or vomiting.Stroke strikes fast. You should too. Call 911. Never ignore the symptoms of stroke. Call 911 if you have any stroke symptoms, even if they don’t last long. DON’T IGNORE THE SIGNS OF STROKE!

What Is a Stroke? A stroke happens when something changes how blood flows through the brain. Blood brings oxygen and nutrients to brain cells. If blood can’t flow to a part of the brain, cells that do not receive enough oxygen suffer and eventually die. If brain cells are without oxygen for only a short time, they can sometimes get better. But brain cells that have died can’t be brought back to life. So, someone who has had a stroke may have trouble speaking, thinking, or walking.

There are two major types of stroke. The most common kind, ischemic, is caused by a blood clot or the narrowing of a blood vessel (an artery) leading to the brain. This keeps blood from flowing into other parts of the brain and keeps needed oxygen and nutrients from reaching brain cells. Blockages that cause ischemic strokes stem from three conditions:

In the second major kind of stroke, hemorrhagic, a broken blood vessel causes bleeding in the brain. This break in the vessel also stops oxygen and nutrients from reaching brain cells.

Sometimes the symptoms of a stroke last only a few minutes and then go away. That could be a transient ischemic attack (TIA), also called a mini-stroke. A TIA is a medical emergency. You should get medical help right away. If a TIA is not treated quickly, it could be followed within hours or days by a major disabling stroke.

Learn how to lower your risk of stroke.